Using Facebook Messenger to run referral marketing campaigns is the #1 tactic for anyone that wants to gather leads for their business. Here’s how to do it.

I don’t see any reason to stop writing about it.

Using Facebook Messenger to run a viral giveaway, or a Milestone referral campaign is the #1 marketing tactic, I suggest to anyone that wants to gather leads for their business.

Because it works, with the right prize, the right copywriting, it can be a real miracle.

And in case you can allocate some budget to promote the campaign, you might be able to gather 35K leads in 20 days.

One can say that things are not as easy as I might make them sound in the paragraphs above; it’s true, but I give you my word that it’s not that difficult either.

Most of the time, referral marketing campaigns fail to get the traction they deserve because their message gets lost in the endless noise we call the Internet.

Finding the perfect marketing channel can be a tedious task, but as Fetch & Funnels’ founders explained to us: “the second we saw that you could build a subscriber base on Messenger, our first thought was that this is going to be the next biggest marketing channel that exists.”

With extraordinary Open & Click-through rates, Messenger is a less intrusive and inexpensive way to get your message right in the face of your potential customers.

The very essence of this article is to help you understand the exact steps required to utilize Facebook Messenger for your referral marketing campaigns.

Without the right prize, your messenger referral marketing campaign could become a shipwreck.

The prizes you offer are the core of your campaign; it’s what made The Hustle gather 300K fanatic readers, and boosted Dropbox’s growth by 3900%.

Although I’ve already written an extensive guide on how to choose the right rewards for your referral campaign, I’ll lay down your options quick:

We strongly advise you to make the rewards 2-sided, which means that both the referrer and the referee get a reward. That’s a method used by Airbnb in the past; they offered travel credits to both the people who invited their friends and their friends for accepting the invitation.

Right now, there are two options for running a referral marketing campaign via Facebook Messenger:

By using this approach, whatever your choice about your campaign prize is, you’ll have to present it in the form of a giveaway.

I’ll give you two examples.

When our product was (almost) ready to launch, we had to start spreading the word about it.

Trying to gather email addresses for a product that would work entirely via Messenger seemed like a stupid idea.

That’s why we’ve built a pre-launch campaign that followed the giveaway model by using our product. We wanted the people to see a demo of how the Messenger flows of the referral campaign could look like, and give to 20 people early access to the product itself.

Users got more entries for getting more of their friends to sign up to our pre-launch, and the more entries one had, the more their chances to get early access were. 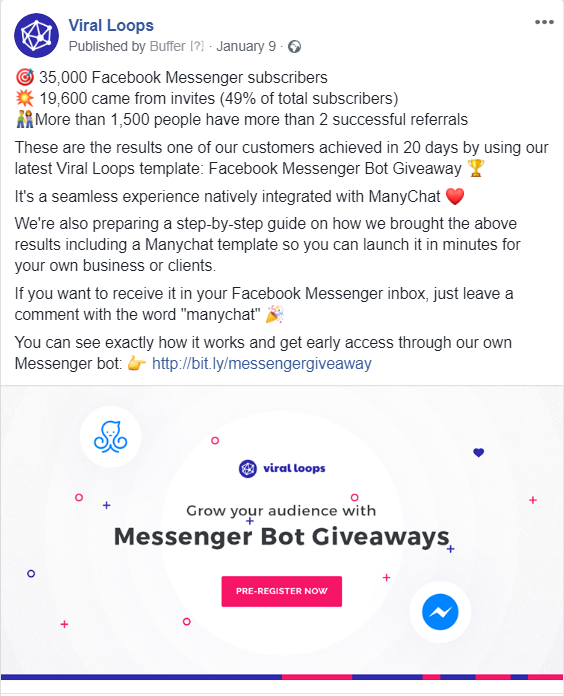 Beardclub is one of the biggest (if not THE biggest) retailers for men grooming products. When they decided to give a year’s worth of beard oils, Messenger was the obvious choice.

They asked people to join their referral marketing campaign, and then incentivized them to invite their friends by giving more entries for every successful referral! 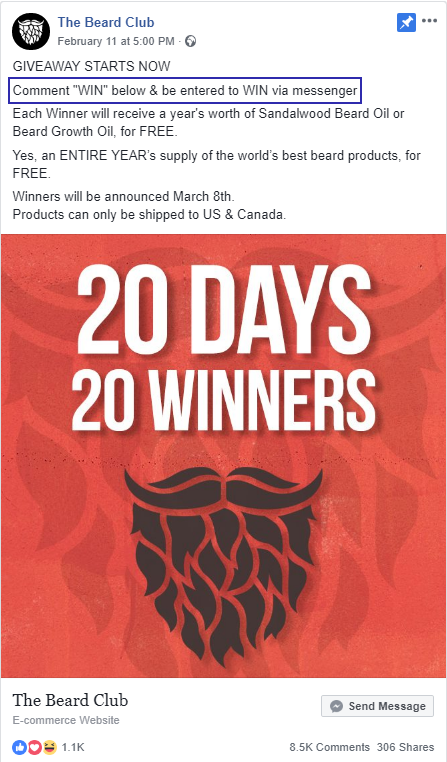 I will not get more into the details that made this campaign a huge success, because I’m already preparing a colossal case study about it!

Here things are straightforward; actually, it’s the same process with the one I describe in the article about creating a kick-a$$ Facebook contest.

The steps are really simple:

It sounds easy because it is. We’ve also created a video that showcases the steps:

I guess that by now, you’re wondering how you can pick the winners for your referral marketing campaign via Messenger.

Time to get sales-y.
Messenger Bot Giveaways by Viral Loops, picks the winners for you!

It sounds like a telemarketing ad, but it’s not a joke. All you have to do is:

If it helps, we have a short tutorial for it:

This approach is the same as the one used by companies like Harry’s Razors, The Hustle, or Joeywears; only now you have the option to run it via Facebook Messenger.

The way it works is effortless; there are multiple rewards with each reward corresponding to a certain amount of referrals. 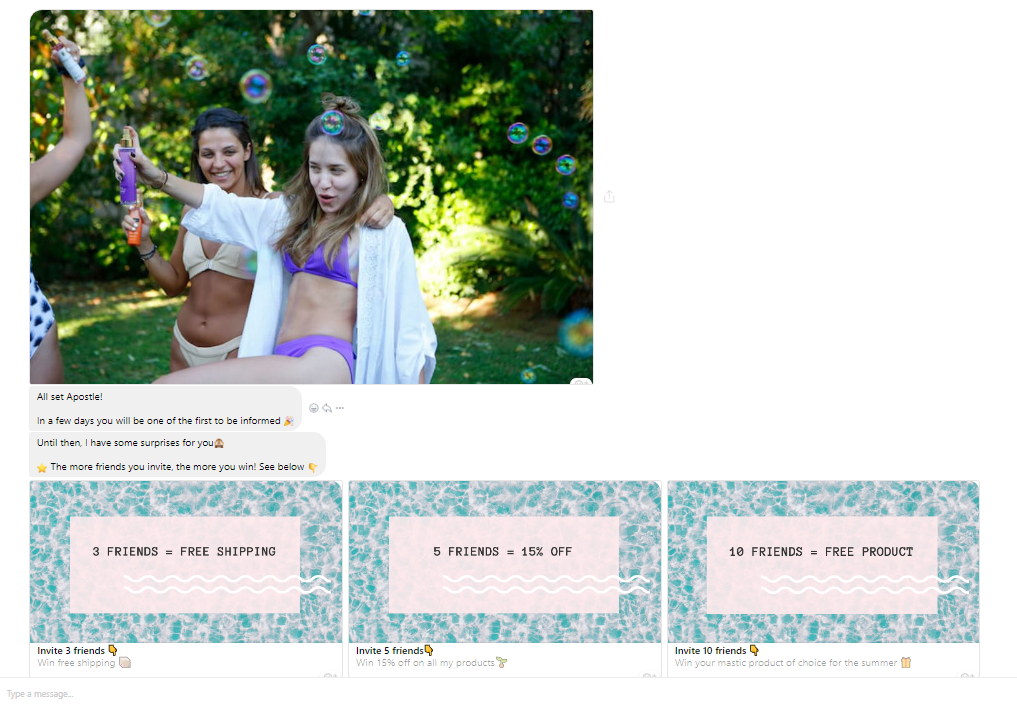 We prepared a video to showcase the template in action.

Here’s how you can set up your Milestone referral campaign via Facebook Messenger:

For a more in-depth tutorial about the installation, please see our Milestone Referral for Messenger installation guide.

Choosing the right prizes and setting up your campaign- even though it is of high importance, is only half of the story.

Without any promotion, any hope for success goes with the wind.

The same applies to tracking. Without proper monitoring, you won’t be able to make changes with a positive impact on your campaign.

I won’t get into much detail, but I thought it’s an excellent opportunity to present the best promotion tactics, as well as the metrics you should keep your eyes on while running your referral marketing campaign via Messenger.

These growth tools are really easy to set up. The only one- out of the three, which can be a bit tricky to set up is the “Facebook Comments” growth tool, but we created a video about it:

Note that the Facebook Comments growth tool now comes with the latest versions of our Messenger Bot Giveaway, and Milestone referral for Messenger templates.

When you’re tracking the performance of your campaign inside Manychat, keep your eyes on:

The most important metric when it comes to referral marketing campaigns, though is the K-factor.

In case your Messenger referral campaign is also hosted on a dedicated landing page, you should always check your Analytics platform for the following metrics:

I will close the article the same way that I started it; Using Facebook Messenger to run referral marketing campaigns is the #1 marketing tactic I suggest to anyone that wants to gather leads for their business.

It’s easy to set up, yet effective when it comes to results.

This is not by any means a step-by-step guide, but rather an introduction to the possibilities offered. If you want to learn all the essential details, I recommend reading all the blog posts I’m linking to, throughout this article.

If you read from top to bottom, I have to thank you for that; If you skipped directly to this paragraph, stop cheating. 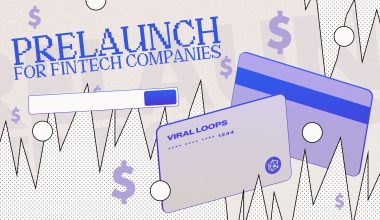 Learn more
‘Fintech’ is a term I hear more and more these days. Ever since the early days of internet…
MMessenger 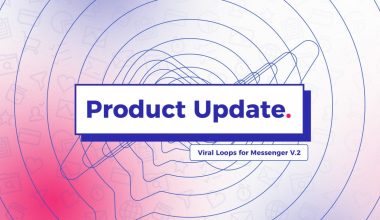 Learn more
We are almost halfway through Q2 for 2019. What a ride! If you are familiar with our work,…