How Joeywears used referral marketing before raising $100,000 on their Kickstarter campaign

^ That’s JoeyWears an e-commerce company which tries to change the way we wear underwear.

Yang, Jake and their awesome team want to offer superior quality fabrics, the perfect fit and innovative designs to make underwear the most comfortable thing in your wardrobe.

We interviewed Jake Mellet, Co-founder at JoeyWears to know more.

Hey Jake, can you tell us about what you are working on? What is JoeyWears?

In a nutshell, JoeyWears is the underwear your balls deserve.

We wanted to create a pair of boxers that are comfortable, sustainably sourced and look great – most undies just do one of those well. It’s taken us about 9 months to develop these bad boys, and we’ve just launched our Fresh-Man range.

Our pouch technology is designed to prevent sweat, our fabric is 3x softer than cotton & sustainably sourced, and they don’t ride up. We tested them on 100 beta testers, and they really loved them – even describing them as the “the upgrade my underwear drawer needs”.

Tell us more about the stage of your company?

3 weeks ago we launched on Kickstarter. We wanted to raise around $15,000 over the campaign, to hopefully find a community who loved JoeyWears. We managed to do this in 30 hours.

We’re now over 1000 backers after 3 weeks, which is incredible.

How are your customers using JoeyWears?

Currently, only our beta testers have a pair of JoeyWears. We actually have two versions – the Pro and the Active.

The Pro version is perfect for everyday wear, and we recommend it for people who work in offices or want the perfect pair of undies for a sofa day.

The Active version is (you guessed it) aimed at the more sporty amongst us. It’s designed to be great for running, the gym and especially cycling, and the feedback from our customers confirms this!

That’s great! Were there any early ‘growth hacks’ or tactics that have contributed to your current success?

One of the really cool growth hacks we did when launching JoeyWears on Kickstarter was to tag everyone who bought a pair in a picture on Facebook. This meant that JoeyWears was appearing on their wall which gave us loads of exposure fast.

Wow! Do you think that you generate sales from word of mouth and referrals?

Yeah, so pretty simply we were acquiring emails through referrals and now we’re converting those emails into backers on Kickstarter. 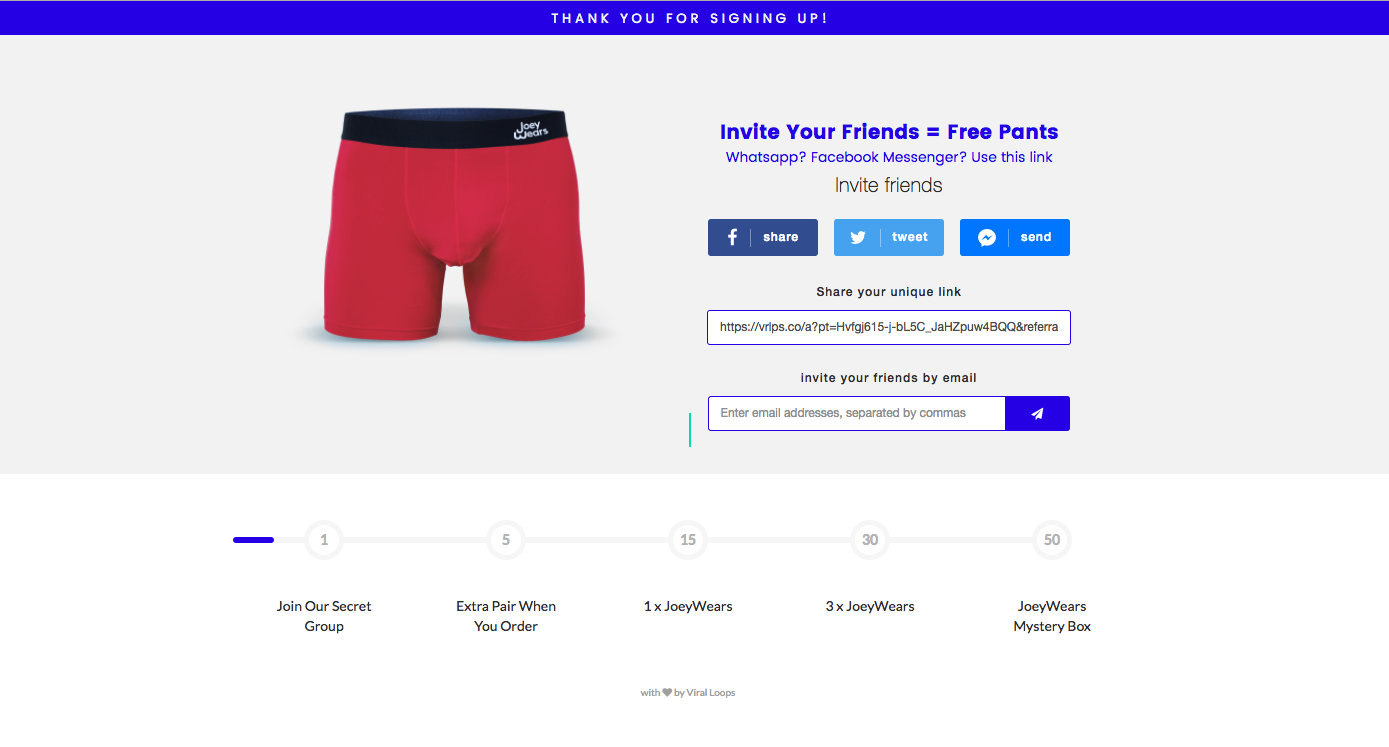 What made you want to run a referral program? What’s your goal?

I mean at the core of it, we wanted to get more email sign-ups so we could have an enormous first day on Kickstarter.

The interesting thing about Viral Loops was that it actually saved us money.

We drove some of the email sign-ups from Facebook Advertising – the cool thing about that is that it turned each sign up into 1.4 sign-ups, which cuts the CPL.

Essentially you can look at Viral Loops as a way to improve the efficiency of your ads – so if you are doing paid acquisition I’d strongly suggest looking at them!

Can you share with us some results/metrics of your Viral Loops campaigns?

Viral loops has a load of options for how you can set up your referral program – so we tried a couple of these out to see how they performed – at the end of every three people we signed up we’d be getting an extra participant, which really helped push us to a huge revenue number on the first day of Kickstarter.

Do you have any core metrics that you measure constantly and are super important for you?

Now, we’re looking mainly at revenue of course – but for me, the most important metric is the number of backers.

The point of this Kickstarter is to be able to manufacture our first big bulk order, but more importantly, make sure that people like the idea – and hopefully that number will hit 1000 in the next few days.

In the future, of course, we’ll be looking more at CAC and LTV as we grow the business. 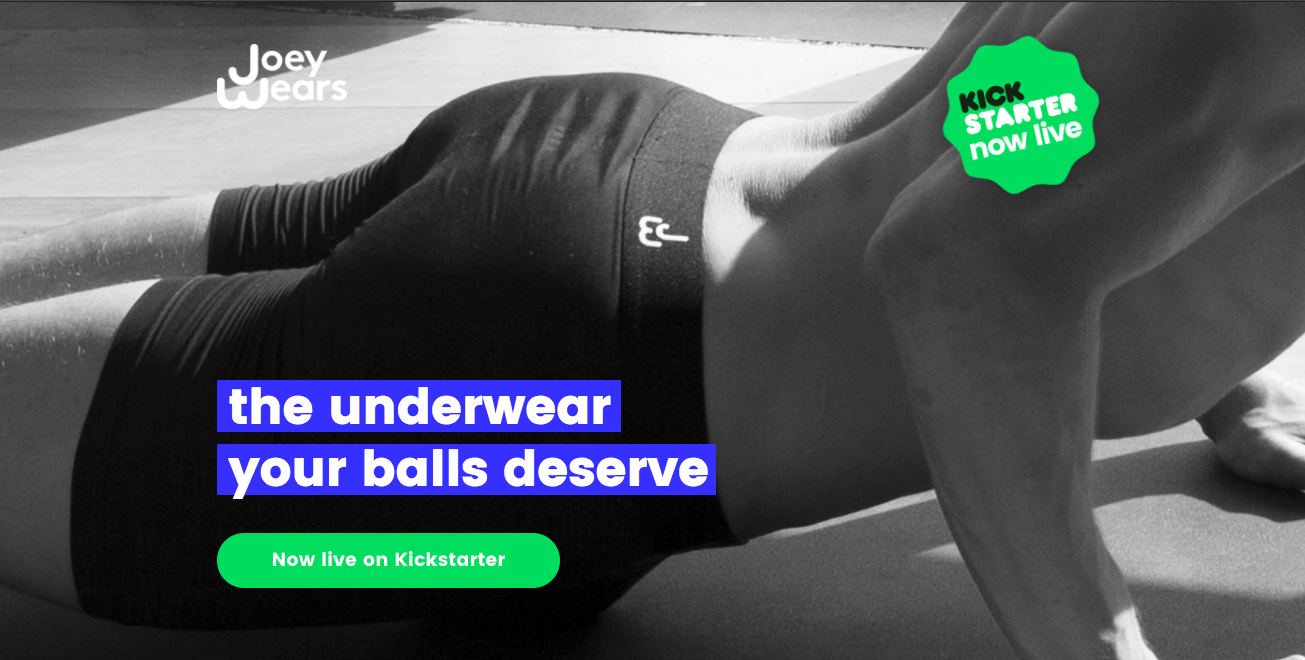 Before we end, what platform is your website built on and what are the top 3 marketing tools that you depend on to grow your?

Our platform is built on Instapage – which was cool because some of the Viral Loops options integrated with that.

Top three marketing tools that have been really useful have been:

Guess what? They have 6 more days to go.

Support them here if you liked them.

If you want to create a referral program like Joeywears, you can check this cool project harrysprelaunchreferral.com and create a Milestone referral campaign in 4 simple steps, like Harry’s did!

The entire process was designed to be as easy as possible! 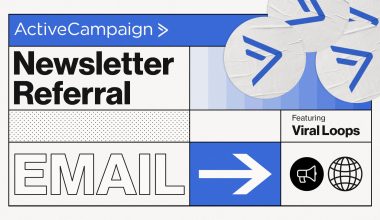 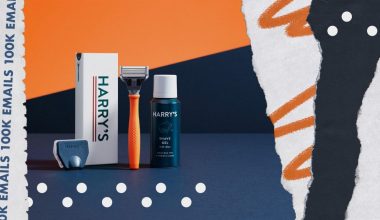 Learn more
Last week, I wrote a thorough article considering my experience with The Hustle’s milestone referral program. I like this…