I always find that the most challenging thing about a new venture is to find the courage to start working on it.

There’s crippling anxiety that comes with a new idea.

That’s why I’m always happy seeing our customers running successful prelaunch campaigns. It’s also a massive payoff for Viral Loops, as we made one of our primary goals to help companies to launch their products with an impact.

This is reflected in our content as well. If you’re interested in prelaunch campaign’s you should check the following resources:

I had our customer success team search for compelling prelaunch campaigns running with Viral Loops, so I could reach out and potentially write a case study about them.

A familiar name came up; Hunter McKinley. For those that don’t remember, we interviewed Hunter in the past and talked about Messenger bot giveaways, milestones, and design.

A few words about Yac and their prelaunch campaign.

So what is Yac all about?

In short, Yac is a voice messaging tool for remote teams. I think the tagline on their website perfectly captures the product’s capabilities:

Yac’s team leveraged the power of tools like Twitter and Viral loops to create “buzz” within the remote work community.

Their success started with Twitter; specifically, a tweet that caught the attention of our “would be” investor that helped us fund our first VC raise. From there, they leveraged Viral Loops to help continue the growth of our audience with the viral effect of referral marketing.

Their growth has led them to be featured in Tech Crunch and become well renown by some of the top names in the remote work community.

Yac was looking to create buzz around their app before they launched at SXSW.

Every user that came into their funnel had the opportunity to become multiple users, as the product relies on the network effect, meaning each user would need to get their team on board for Yac to be successful at their company.

The prelaunch campaign was built on the waitlist campaign concept (similar to Robinhood) to encourage new signups to get their team on board and familiar with Yac to get access earlier.

This tactic ensured that the top spots were awarded to excited, qualified teams.

Let’s take a look at the campaign’s flow.

You can’t have a prelaunch campaign without a landing page. Yac built a page that was simple and straight to the point.

The page’s header is the value proposition of the product; it communicates that with Yac, you can save time from Slack conversations and Zoom meetings.

Right underneath, the subhead acts as a brief description explaining that Yac is a product that enables asynchronous collaboration for remote teams via voice messaging.

And of course, the call-to-action was clear as day: “Request Access.”

Every product has to inspire trust; that’s why below the fold, we see that Yac used testimonials to reinforce social proof.

Looking back at it, Yac’s prelaunch page is a textbook landing page example. According to Unbounce, high-converting landing pages:

Yac’s landing page covered 5 out of 5.

The participation flow of Yac’s prelaunch campaign was very simple:

After signing up, the users were prompted to share their unique link with their network. The sharing options available were:

New leads were sent into Mailchimp, avoiding the need to export and import later. After a new lead was added to Mailchimp a custom-designed welcome email was sent that pulled in the unique referral code from Viral Loops and presented it as a shareable link in the email body. 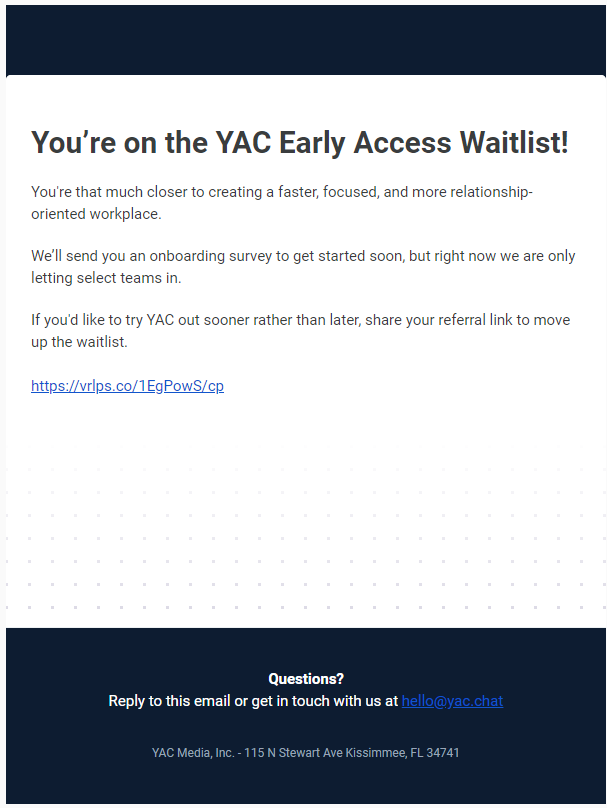 The leads also got into an email sequence as a lead in Intercom for nurturing emails.

The unique thing about moving a lead from Viral Loops to Mailchimp and then to Intercom is that now that the lead is in all 3 systems. Yac’s team was able to fully track them through all stages of the funnel.

When a lead had been in Intercom for a certain amount of days, an Airtable row was created on their behalf which added them to one of the early access batches. Once that batch was full, a Gmail Zap would send them a welcome email with a unique link for their company using a bit.ly zap that inserted the company names the team collected from the Viral Loops form.

After that the invitation was sent, Intercom would “watch” to see that lead move to a user so that the team could track the conversion rate from invites. The entire process was automated and thanks to our Zapier integration not a line of code needed to be written. 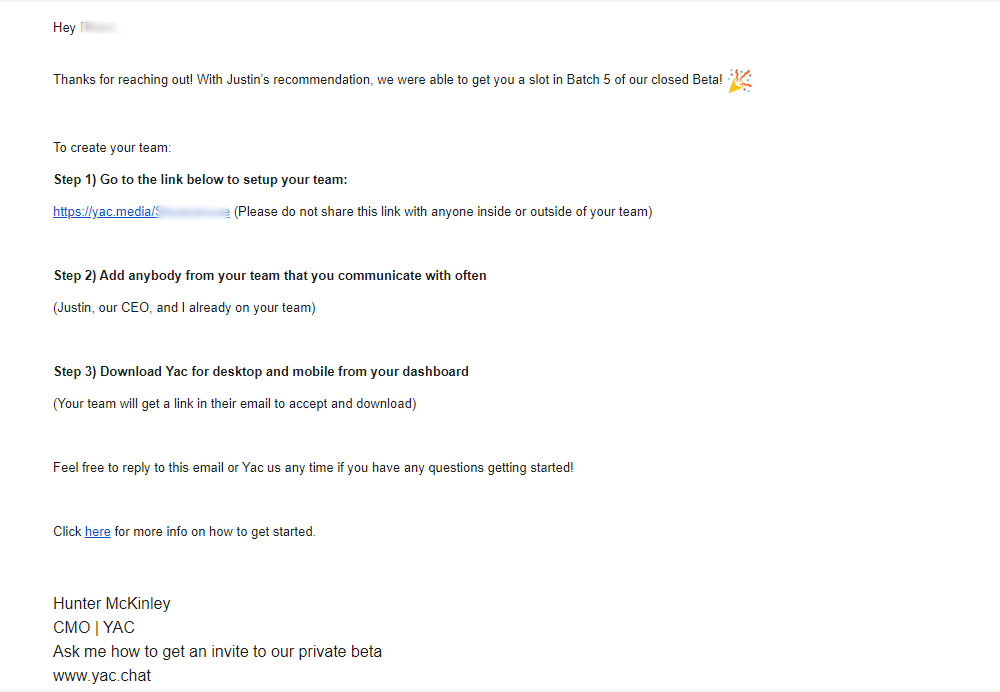 As it’s natural, every piece of marketing that led to Yac’s campaign page, forced users to go through the referral flow.

A smart example was their post on Hacker News, which gained some traction in the comment section, and included a link back to Yac’s page. The post was non-promotional, but it attracted the right “eyeballs” since it was about remote work. 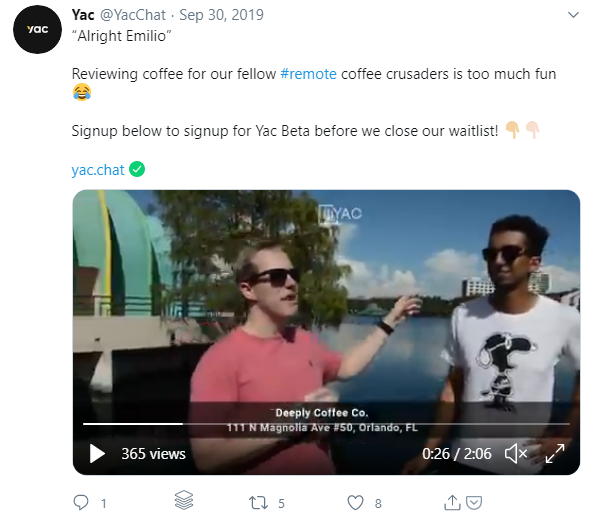 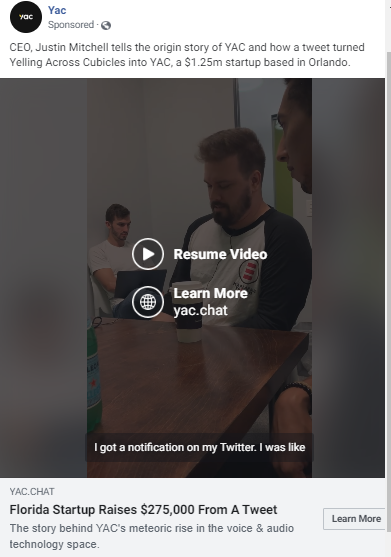 Twitter is a great place for starting a conversation, receiving feedback, and conducting light and quick research. Yac used Twitter as a platform to test what type of content worked. In addition to this, they signed up for a service that would promote our twitter posts to boost impressions.

So, did Yac’s prelaunch campaign work? In Hunter’s own words: “Yes, we generated a “buzz” that folks still ask us about to this day.”

Some might argue that 3546 participants are not a huge number for a prelaunch campaign. I think that it’s a matter of goal setting.

Although the signups seem low, the overall campaign was a massive success because we brought in quality over quantity for team leads that brought tons more teammates.

Remember that in Yac’s case, we talking about ‘teams’ rather than simple ‘participants’

If you’re running a prelaunch campaign for a physical product, I agree that 3546 participants don’t sound like a significant enough number.

But in Yac’s case, they needed initial batches of people to use the product and provide feedback. I wrote an extensive guide about getting user feedback from early adopters.

When you’re running a prelaunch campaign for a product like Yac, you need two things:

So, I think that Yac nailed it.

Launching a new product is always challenging, but a prelaunch campaign is still a great way to get closer to your goal and launch with a meaningful impact.

Yac managed to gather an initial set of users to try and create a relationship with the product.

If you want to build a prelaunch campaign similar to Yac, you can use our Startup Prelaunch Template.

Maybe one of our upcoming case studies will be about your product. 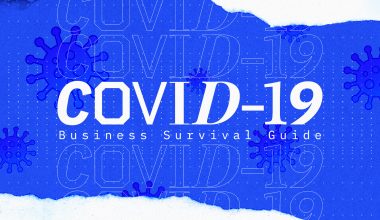 Learn more
“What’s more left to say about the virus outbreak and its effect on the economy?” When I started…
PPrelaunch 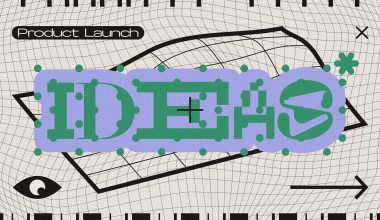